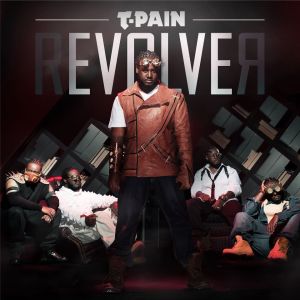 Remember back when T-Pain was a big thing and journalists awarded him titles like ‘Autotune Wizard’ and ‘The Man That Brought Auto-Crooning To R&B’? Well gang, it’s time for another T-Pain evolution. It’s time for RevolveR. It’s time to bring autotune to… Steampunk? Alright, so it doesn’t take a music critic to point out that that’s a really bad idea, and it takes T-Pain about one track-name to abandon the concept entirely; despite the promisingly-titled “Bang Bang Pow Pow”, RevolveR takes a stylistic u-turn about five seconds in and never looks back. Do not be mistaken: this is not Steamboy, The Difference Engine, or Abney Park’s latest obsession. In fact, it isn’t much of anything at all – when an album abandons its conceptual pretensions before the first track hits, things never bode well, but once you notice that marketing failure is the least of RevolveR‘s issues.. well, it’s a slow, steam-less march to the grave. What starts as a fun, silly romp devolves into one of the most sloppy, repetitive and surface-of-Mars-barren albums I’ve napped through all year.

Every time I write a review, I quickly jot down some listening notes. They always end up longer than the review itself, and it’s a useful way for me to catalogue an album’s more memorable moments. T-Pain’s no exception. However, with RevolveR, I found my little notepad slowly filling with a collection of T-Pain’s most wretched lyrical SNAFUs, to the point that that’s all I’ve got. Think I’m overreacting? Let’s break format and list some of his lyrical gems:

Warning: this is the tip of the stupidity iceberg.

– “Everybody tappin’ on the bottom of my bottle” (“Bottlez”)

– “Girl plane tickets too high for me to pay” (“Default Picture”, contradicting every other line)

– “Girl you makin’ me spend my time, checkin’ your timeline” (“Default Picture”)

– “Let me get this rubber out this Gucci bag, We gon do something to make your daddy mad” (“Rock Bottom”, RevolveR’s aptly-named halfway-point)

– “My trunk rattlin’ like I got a bunch of New Boyz inside” (“Regular Girl”, sounds like “newborns”, Not the last time this occurs.)

– “Puttin’ creases in my t-shirt with ya ass, baby that’s your theme song put it on tha glass” (“Center of the Stage”, DM me if you know what this means, please)

Okay, so T-Pain has no idea what a metaphor is, and it’s often hilarious – that alone won’t kill a club track. Maybe its necessary that I reiterate that I don’t hate club music. Club music is obligated to do one thing and one thing only: make people dance. I understand that. The key difference with T-Pain is that his lyricism on RevolveR is distractingly bad. Those above quotations aren’t cherry-picking, they’re the lyrical highlights; the only memorable moments of those respective songs when T-Pain isn’t reiterating the same random lines about having sex or meeting a woman or being rich or whatever. And that’s not to say that songs about those things are necessarily bad either, it’s that R&B artists are swimming upstream lyrically – either their lyrics or their delivery has to be compelling enough to counteract the fact that much of their genre (contemporarily) is flooded with repetitive nonsense. Here, T-Pain has neither; go relisten to “Slow Jamz”, go purchase anything Janelle Monae has released – see what I mean (heck, Frank Ocean). T-Pain is on a whole other level, and if you’re still unconvinced, let’s take a listen to the nigh-hilarious, unintentional racism of “Mix’d Girl”. “You tellin’ me you Japanese – I’m tellin’ you.. maybe?”, T-Pain auto-croons to his beloved, “Are you listening? Do you even speak English?”. He then suggests she might not be able to tell him what races her parents are. Do I have to push this any further? This is some of the most entertainingly, unintentionally racist songwriting I’ve ever heard, and even if I were in a club, and “Mix’d Girl” somehow came on, we wouldn’t dance. We’d sit on the floor and laugh and wonder how South Park didn’t get to these lyrics first.

The parade of unintentional hilarity doesn’t stop with “Mix’d Girl”. RevolveR’s potential conceptual success, “Default Picture”, is a heartfelt and sincere ballad about his only-mildly-creepy Twitter-crush on a female abroad, I’ll give him that. “I got this feelin’ in my bones that I can’t get rid of – but that’s probably the bass” is an effective line, and those don’t come cheap on RevolveR (though it does sound like he’s saying ‘balls’). With that set down, he proceeds to really milk the Twitter metaphor: “you don’t ever show up in my mentions, girl, just search my name” “Am I botherin’ you? Should I be unfollowin’ you?”. By the time “Default Picture” wraps up, it isn’t a stretch of the imagination to imagine some errant 4-Chan denizen somehow snuck in and ghostwrote a T-Pain song. The lyrics read like a somber Weird Al tune about online stalking, and on repeat listens only proves itself increasingly self-parodic (sorry Weird Al!). “5 O’Clock” follows and has even deeper issues, incorporating a criminally good Lily Allen sample… which T-Pain subsequently ignores to the extent that her half of the song is sad and touching, and his half still manages to stay drunk and laid and ignorant. The dichotomy is so great it ends up functioning as a metaphor for the entire album: T-Pain is just doing to do his thing, dammit, no matter what you might have to say to the contrary. Perhaps nap time really is the best idea, Lily.

Rarely does an album come along with so many egregious thematic and lyrical issues that I can riff on every single track. “Drowning Again” is feels like the umpteenth slow jam and features lyricism that wouldn’t feel out of place on a Korn track… superimposed over surprisingly pretty pianos that only draw out the already thick melodrama. “I Don’t Give A Fuc” sees T-Pain disappointed in his 4-Loko-chugging girlfriend as he clutches his bottle of ‘Rozay, and features a track-title that ought to have the audience nodding in disappointed agreement (though its Backstreet-Boy-esque harmonies work, and should have been further integrated). By the time “Turn All The Lights On” successfully bangs into place as the album’s proper closer – pairing up with the album “Bang Bang Pow Pow” promised (and failed to deliver) an hour previously – the audience has been fast asleep for twenty minutes and its title has become grimly appropriate.

T-Pain can’t write lyrics and he isn’t entirely sure what to do with a metaphor – ideally, this is why Lil Wayne, Lily Allen, Pitbull, Wiz Khalifa, Chris Brown (x2), One Chance and Ne-Yo show up to lend a hand. In a perfect world, this is how a T-Pain track works. It’s an incredible frustration, then, to watch Lil Wayne be generally lazy (“I go so hard they call me go-so-hard”), Ne-Yo and Chris Brown and One Chance autotune themselves to indiscrimination, Lily Allen get underplayed, and Pitbull be, well, Pitbull. Aside from Wiz Khalifa generally holding his own on his guest verse in “5 O’Clock”, it’s only when E-40 shows up on bonus track #3 that anyone brings any energy… and even then he devotes all his enthusiasm to the sorts of grimy sex-description that don’t feel out of place on an E-40 album, but completely overbalance T-Pain’s milder fare.

I’d go into a discussion of the musicality of RevolveR but, dangit, there aren’t any surprises there either. “Bang Bang Pow Pow” and “Turn All The Lights On” hint at the sort of excitement a proper fun-loving Steampunk T-Pain could have given us, but somewhere along the development process RevolveR morphed into an hour of slow-jams, lazily pot-shotted in the general direction of the strip club. When the beats hit they hit soft, coated in soft strings, pianos, and that omnipresent T-Pain ‘snap. It’s boring because it isn’t inventive, and even when it speeds up to throw in some heavier percussion (“Look At Her Go”) there’s a weird, emphatic lack of energy. When RevolveR doesn’t get you amped, it completely exhausts you.

I wish I had something positive to add here, but RevolveR makes it exceedingly difficult to praise anything at all. Are there singles here? Well, yes, and that’s the marketing philosophy under which this album was released; you’re likely to hear a cut or two off RevolveR at the (strip) club, which is where they belong. Is it T-Pain, will it feed your autotune addiction? Well yeah, it will – but there are others out there doing it better. Sure it’s unintentionally hilarious, but that isn’t the sort of album we go and spend money on, is it? What the heck happened, T-Pain? Fun-loving is one thing, RevolveR is just exhausting and shoddily constructed. Don’t even get me started on the Beatles’ Revolver/RevolveR distinction, or T-Pain’s ongoing autotune obsession, or what the heck musical genre this is. I’m still mad about the lack of Steampunkery. RevolveR fails in its most basic of objectives: it isn’t even amusing.

Originally published right here, January 2012. Much to my chagrin.