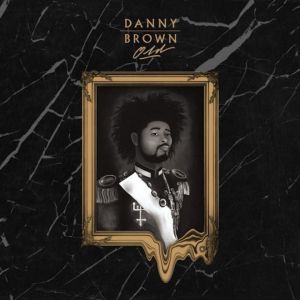 I’m not convinced Danny is telling the truth in that quotation up there, where he pretends not to know wholesale what he’s up to. Somewhere behind the skinny jeans and the Skrillex hair hides a calculating and clever man, whose every move laser-sights him to greater exposure. RiFF RaFF can relate, I think, and so it’s something of a vogue time to be a rapper this strange. Make no mistake, Danny hasn’t let go of his puppy-bark flow or his blowjob jokes or his Molly shoutouts or his fixation with synthesizers. But for all that lovable/gross pop-culture weirdness, OLD is an obvious follow-up to XXX – to the extent that it more or less ignores the rest of his ridiculously-prolific output of late. The first half of OLD – and again he’s sequenced the album like vinyl, because he wants to be rapgame Bowie’s Low – comes at you like the knowing sequel to XXX‘s sober and sad B-side. On OLD’s Side A, Danny’s still alive somehow, and he’s still wrestling himself away from his Detroit street-life flashbacks. Artistically, that continuity makes sense. Fiscally speaking, Danny dropped “Grown Up”, “ODB”, “Dip” and “Kush Koma” since XXX released – and two of those tracks aren’t on the album at all, while the other two are buried on Side B. That means Side A is gutsy; I like gutsy. This is the sort of artistic license we get when a man like Danny, who ostensibly has no idea what he’s doing, is properly handed the wheel. Yes of course you bury the singles after you become a popstar – of course you keep Action Bronson and Kitty Pryde and your Bruiser Brigade and your hit singles far away from your commercial debut. You get to do that when you’re hugely popular and you’ve spent countless hours carefully convincing the pop world you’re insane.

Though it maintains that vinyl-side structural integrity, OLD does differ in a number of important ways. For one, Danny’s right: it isn’t as focused. Not at all – Side A (A is for Angsty) is all about giving us that “Old Danny Brown”, by which he means his J Dilla influences and his explicit raps about selling pounds of drugs, but also his flashbacks: “Torture” gives us a terrifying vignette of poverty and destitution. “Wonderbread” features a young Danny Brown getting curb-stomped over that same loaf that we remember from XXX. ‘Old Danny Brown’ means “The Return” too, on which we get Danny and Freddie Gibbs trading violence over Andre 3000’s “Return of the Gangsta” refrain (OLD‘s answer to “Grown Up”‘s ATCQ callback). “Dope Fiend” is a starkly juvenile rundown on Danny and Schoolboy Q’s evening activities (chorus: “Open wide ho”),  but tempers its ugly misogyny with an inescapable sense of desperation on both ends. The subject matter isn’t rare for Danny, even on the album where he promised us less blow-jobbery. To Danny’s credit, Schoolboy Q gets overexcited and scatters around the track unnecessarily; given more screen-time Danny’s trademark self-deprecation likely could have balanced the track. Or given us a reverse version of “I Will”. Who, really, can say. OLD‘s Side A stays suitably grim while giving us a more holistic Detroit ghetto – and to quote Danny is almost to do a disservice to his narratives when he finally does mention abortion, or drug abuse, or his mother. To an extent it’s the same old “Detroit Shit” we’ve been hearing since his mixtape days, but his flow is tighter and more descriptive, and the lower of his two voices almost monopolizes the first half, which opens the second up to the levity we’ve come to expect from the other face of Danny’s bipolar output.

And before we go there, a special nod to “Clean Up”, the first track I can recall that gives us a solid look into Danny Brown’s interiority. Because of his musical… condition, as a listener it can be difficult to ever say you know Danny Brown; where does he come from, in an emotional sense? Is he aware that there’s a massive disconnect between his multi-thousand-dollar shoes and the fact that his nation wants to sell his city to Canada? He’s aware, and for once he promises to “Clean Up”. It’s a complete reversal from XXX‘s suicidal overtones, and that’s not like him. It’s also a lie and he knows it, but to get something like ‘Danny Brown: The Ballad’ is a rare and surprisingly touching opportunity; it’s adult in a way the majority of his material betrays. It’s moments like this,  like Danny addressing his mother and daughter, that give OLD that touch of maturity and authenticity that Danny’s previous material largely lacked. The fact that it’s followed by the nihilistic, off-the-rails “Red 2 Go” is a brilliant turn that gives lie to the notion that he can keep his mind off the street for more than a song. It’s easy to forget that Brown is, well, old, and those moments when his odd wisdom shines through prove Danny’s strongest movements here.

Of course, he promises the same thing on “Dope Song”, the intro to Side B. He says it’ll be his “last Dope Song/but not [his] last Dope Song”, and maybe we sigh, and maybe we believe him. And then Side B is a pinball machine of drugs. Because Danny’s been charging his bark for an entire half of the album, he is yapping up a storm on Side B. Song by song we’ve got the bait-and-switch “Dubstep” (drug dealing), “Dip” (Molly), “Smokin and Drinkin” (…smoking and drinking), “Break It [Go]” and “Handstand” (twerking and twerking, sigh), “Way Up Here” (because Side B is the depressed Andrew WK of rap), and “Kush Coma” (ft. a lazy, track-sapping A$AP Rocky). Put a drink (or whatever, it’s Brown) in your hand and you might not even notice the cuts between tracks until you hit the sudden comedown of “Float On”, in which Danny’s voice drops back down, Charli XCX sighs the chorus, and we get a moment to reflect. “Remember when Mommy sent me for the Wonderbread/and n* came and stomped on my fuckin head?/It’s like I learned right then you either sink or you swim/an if you wanna beat your enemy you gotta think like him” – we know, Danny. We know from the several other tracks referencing that incident; that last track, with its quiet-hum organs, arrives as a knowing requiem for the rest of his lifestyle. Like “Clean Up”, it hits hard, and like that track it’s one more piece of evidence that Brown knows exactly what he’s up to. He might be ignorant all over side B, but Danny Brown is never ignorant of Side B, and that’s such an important distinction. I haven’t spoken much of the lyrical content on this side, and I don’t feel I have to: you know what happens. Danny’s naturally talented as hell, his beats are chilly sci-fi, his rhymes know just how to tinge his sexuality and his drug abuse with desperation, so you’re never quite happy – but like Danny, you’re never exhausted enough to quit, either.

Of course OLD doesn’t match up to the shock value of XXX – Danny’s breakthrough mixtape hit like a hammer and it had to, so many of us had never heard its like before. OLD isn’t as focused, for one, and it lacks that desperate hook-to-hook rap that captivated us on XXX, but that thematic pollution side-to-side works to its benefit. Though it never hits the former’s shout-along-chorus highs, Side A feels so much less obvious, and so much more packed with detail than its prequel, his reflection is less forced and more sincere this time. And maybe that’s because Danny’s mental state forces the two halves into interbreed: we’re never sure if he’s going to tell us a horror story or celebrate his own excess – but we know that like his sense of humour, he can’t leave out that nagging, suicidal doubt from nearly anything he writes. That sorrow-black core that paints nearly all of Brown’s work is instrumental to his success as a fantastically bizarre presence in rap, and like all of his material, OLD never lets the audience get comfortable. That might even be an issue of Brown’s crude sense of humour weren’t in full effect – but since when has Brown’s voice not embodied contradictions? This is a man that waxes sing-song about the moral and physical devastation of drug-addiction on “Dope Song”. I love it. It’s gross and awful and thought-provoking all at once; it’s a stomach-churning sort of laugh that he’s now perfected. OLD is strange in all the right ways that we’ve come to expect, from its vocal gymnastics to a Danny’s often-frigid beat selection, but so much tighter than Brown’s previous material – and that includes XXX. He’s never been particularly approachable on album, and nothing about that changes, but we’ve never been this far inside his head before. If we’re going to talk weaknesses, a nod is due to the generally forgettable guest-raps (though recognition is due to Brit-chopper Scrufizzer on “Dubstep”), and OLD‘s necessarily exhausting second half. That said, as the follow-up to a Mixtape that came out sounding like a eulogy, the opportunity to hear a properly mature Danny Brown is a treat and bound to be one of the coolest releases this year.