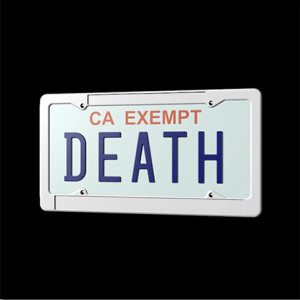 Well alright, maybe it isn’t difficult, but it might be ridiculous and unnecessary. Any discussion of Death Grips as a musical.. project.. thing is bound to be nested in a description of the sorts of sounds Death Grips actually produce, and an assessment as to whether they’re getting better or worse. You know, like a review – and that’s fine! I like doing reviews! But when it comes down to whether or not I can recommend Death Grips’ new album – the free-online double-entendre Government Plates – it’s largely going to be a factor of whether or not MC Ride, his perma-furious DJ Andy Morin, and drummer Zach Hill are making sequenced sounds you already enjoy, or you know to enjoy because it’s cool to like Death Grips right now, or whether you can appreciate them as an aesthetic entity (if not necessarily a musical one). All three are valid access routes to Death Grips these days, and the band does nothing to dissuade  it – have you seen MC Ride? – and so I feel the necessity to look at the band all three ways, and attempt to parse out what might be going on here musically. Or aesthetically.

That said, this is the MC Ride hype train, and in the spirit of whatever-this-genre-is it feels appropriate to go straight for the throat and get the tl;dr out of the way immediately: Government Plates is a solid addition to the canon. It’s also short, blistering, blood-curdling, increasingly synth-y, sarcastic, free online, unbalanced, and intensely free on the internet. If you’re a fan of these guys, you’ve already bled the MP3’s dry and you’re waiting for your next fix and maybe secretly hoping we can get back to Exmilitary‘s nigh hardcore-punk pacing, lyrical acuity and Vancouver skate-punk music videos (that’d be me). You’d be the ones reading this just to see how I talk my way around having to talk about Death Grips, and checking whether or not my punk cred is going to see any revival after that Lady Gaga review last week. Fair enough! The rest of the review is for anyone else that’s wondering what the hell the deal is, whether or not MC Ride is an MC and therefore this is a rap crew, and why I’m taking so much time getting to the review portion.

This part’s for those people in the latter category.

Wikipedia says “Death Grips is a hip hop group from Sacramento”, which is a charitable and fun way of saying they definitely use beats, and MC Ride’s first name is “MC”. Death Grips cleave closer to something like alternative Hip-Hop attempting to appropriate melodic Industrial while keeping one eye firmly and secretly locked on the club dance floor. At their most accessible (that’d be “I’ve Seen Footage“) they sound like an extremely antagonistic Primal Scream therapy session featuring a Skinny Puppy fan for a DJ and a drummer whose only obvious musical alliance is technical acrobatics. At their least accessible, they sound like someone threw some screws into a washing machine. Along with their pit bull. Sometimes there are guitars; they once let a girl sing. They have trouble showing up to live shows and obeying contracts. One of their album covers is very banned. One Death Grips performance famously consisted of a children’s drum set, their music played through the PA, and a fan’s suicide note. So to say the group values their reputation would be an understatement: they’ve crafted a unique folk appeal by virtue of incredible bizarrity, having no clear musical parallel, and remaining utterly and completely true to their murkily-articulated, libertine philosophy. Fashionable.

So it’s easy to understand why they’ve curried such appeal with their young fan base – MC Ride is fearless, black and coated in arcane symbols and gang signs. His two white accomplices are absurdly talented and musically unheralded in turn. Their music lacks a clear lyrical message beyond rage, paranoia, confusion and isolation – MC Ride doesn’t speak so much as bellow constantly, and his vocal production intentionally obscures  most anything beyond blind, frightening anger at any given moment. They transcend race, they transcend clear imagery or context or politics (beyond, of course, anarchy) – they’re punk as hell, and I’m sure they hate punk music. These boys came out of nowhere, and appropriately they sound like nothing else   – though Yeezus certainly took a shot at it.

Government Plates makes no moves to dislodge Death Grips’ carefully-constructed reputation, though they certainly seem self-aware enough to poke fun at their own superior impulse-control issues (the final track being “Whatever I Want (Fuck Who’s Watching)”). That said, it does push their song construction forward: where previous releases would occasionally deign to hard-rock architecture (The Money Store) or smack of punk (Exmilitary), Government Plates takes Death Grips even further down their own strange road of musical anarchy. Morin’s synthesizers are in full force, several tracks are downright danceable, featuring as close as Death Grips ever come to softer breakdowns (on “Anne Bonny” and the final track). “Feels Like A  Wheel” gave me flashbacks to KMFDM and My Life With The Thrill Kill Kult (on guitars, at least). “Birds” even gives us a lurking MC Ride reciting poetry over a shrill, oscillating klaxon, in between drum breakdowns.
MC Ride is more subdued on Government Plates than usual as well, relegated primarily to audio loops with his trademark beatdown-delivery checked for the majority the album’s second half – leaving DJ Morin to take centre stage. He does a respectable job, too, though for many by premise Death Grips’ affinity for unbalanced percussion loops and shrill everything will prove too much within the album’s opening moments. There are fantastic beats here, though – “Big House” is frenetic, bass-heavy and nearly club-ready, “Whatever I Want” has sparkling synths that only serve to unnerve further, “Birds” plays with softer guitar tones in a way Death Grips isn’t yet known for. He’s pushing things forward, certainly, and deserves credit for it.

That said, despite repeated listens Government Plates can’t help but feel somewhat sapped, for me at least. Perhaps this is the result of a couple years of DG fandom (and one insane live show), but the shrill-synth well seems to be running dry for me – and a further focus on that musical direction detracts somewhat from the freneticism that drew me to Death Grips in the first place. In order to stay this angry, you have to keep amped, and if that energy should run out, you need something beneath it. Preferably not, exclusively, sometimes headache-inducing synths (“Birds“). There’s a question of whether or not Death Grips can do this. Government Plates is a solid musical release, absolutely, and a respectable and appropriately-experimental addition to bizarro-Hip-Hop canon, but it fails to energize in the way their previous releases did. Whether this is a result of their growth as a group, a lessening of their rage, or a blossoming maturity remains to be seen. That said, I’m certainly excited to see what comes next as experimentation (or breakup) seems inevitable for the Sacramento trio at this point. Three things are for certain, though: Death Grips will remain an absolute cultural force to their devotees, a literal headache for their detractors, and a fascinating aesthetic exercise in the meanwhile.