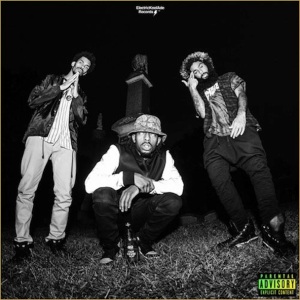 Say what you will about Tyler, the Creator and Odd Future, but their impact on modern hip-hop culture is impossible to ignore. Take Flatbush Zombies: carving their way into the rap landscape toting equal obsessions with drugs, horror movies and vocal modulation (that is, squealing and growling), whenever they aren’t busily rolling joints or tearing out throats on track with their Method Man fang-grills, they’re engaged in the more personal, street-level activities of decrying the evils of government and wrestling their own post-adolescent mental demons. It’s a shift that’s gradually been occurring amongst young African American artists – a search on this year’s Flatbush riots proves educational here – so it comes as no surprise that in light of America’s recent racial tragedies, the disenfranchised and depressed youth are rightfully enraged; and so their recordings must reflect an alchemy of that violence into music. Of course, this is nothing new: Wu-Tang knew what was going on, we can go farther back to N.W.A., and obviously African American discontent can be traced much further, musically, than that as well. The shift occurring now, though, that melding of skate and young black culture in America (that OF typifies), is something of a new thing. The 90’s gave us our mainstream ultra-violence fix in the form of Eminem and Gravediggaz (obvious touchstones for ‘Zombies); 2013 seems intent to bring us Hip-Hop’s Bad Brains.

It’s easy to see, too. There’s a major shift occurring in underground hip-hop just now: look to Tyler sure, but look also to Danny Brown depicting Detroit’s devastation over the last decade with his drug-fueled yelp. Look at the near-wordless primal scream stuff going on with Death Grips. Hell, look to Kanye West, mainstream as hell and fanning his Throbbing Gristle collection with white-noise screams. Hip-Hop. I owe the essay on why I find this stuff so fascinating another time (and it explains why I’ve held off reviewing rock of late), but it’s that same fascination that draws me to Flatbush Zombies, especially on the advent of their second release, BetterOffDEAD.

Flatbush are an exciting anomaly,and so the chances of them ever cracking mainstream are incredibly slim. This is obviously to their benefit …Though maybe it’s bad luck to say that the day after Slim Shady somehow releases another album. Regardless, my first exposure to these maniacs came with their fantastic Pitchfork Selector, whose negligence had me naming them incorrectly to months (thanks). They’ve been hard at work touring with Joey Bada$$’ Beast Coast crew ever since, and giving away 100% of their output via Datpiff. That initial exposure blew me away: Meechy Darko’s gravel-blender delivery and wild-eyed madness had me hooked, Zombie Juice squeals like a cartoon character and freestyles like a tornado, and Arc meanders somewhere in between with his more introspective flow (when he deigns to speak). Nothing about that chemistry has changed since, and nothing changed for their freebie debut D.R.U.G.S., either (Death and Reincarnation Under God’s Supervision, somehow). BetterOffDEAD stays the course for the most part, but sees the trio laser-focusing their presentation. Frankly, they’re just better at it, in every sense. It takes a certain stomach to listen to Flatbush Zombies at all, and a certain drug appetite to really empathize with them (which I thankfully don’t share). So while their presentation might not be unprecedented in the field, it’s tough to find an exact contemporary to their work, even now.

BetterOffDEAD is the sequel to D.R.U.G.S. in every logical sense: the boys are older, colder, weirder, and they’ve dropped any pretense of typical gangster pastiche. From the get-go they’re feeding on brains, tearing apart tongues… and ripping into popular misappropriation of black culture. Darko’s first words on intro “Amerikkkan Pie” read “I am redesigning the mind of the masses/That fear a black man with tattoos and bandanas/but when a white man wear tattoos and bandanas/and joins a bike gang it’s all cool with the balance”. These are the politics we’re referring to when we say Flatbush, Brooklyn, and it’s a fantastic strain of millennial rap-punk that runs strong throughout BetterOffDEAD. Not that their success would even demand lyrical substance, really; it’s a challenge to describe Flatbush Zombies’ vocal tics without resorting to worn metaphor or fumbling similes all over the place. The boys would stand out in their strange field regardless; let’s see if you can guess why:

See what I mean? Who sounds like that?! Well, DMX for one, sort of. The trick-or-treater trio from Nightmare Before Christmas, for two, and that’s a prescient example. Flatbush would undoubtedly be uncomfortable with the label horrorcore (who is, ICP?) but there it is, in each and every track. Ultra-violence, mental devastation, moral and physical degradation. Narcotics! They love it, they thrive in it. And they have to – Flatbush Zombies are anything if not massive drug enthusiasts. Their beat production reflects this, too (and that’s Erick ‘Arc’ Elliot’s job, almost entirely) – it’s a hazy mix of thudding bangers and ethereal, horror-movie sampling introspective jams. There are pianos here, Gorillaz samples, Kanye nods, full strings and a full track or two full of homages. Look at “Regular and Complex (GNB)”, a favourite of mine that manages to elicit memories of ATLiens while lyrically tapping bubbling crack rock and suicide. When they reminisce, which is rare, it’s Arc claiming “the first time I did drugs it was makin’ the beats” – and certainly it has to have been every time since as well. He’s consistent too, and so just when you get as comfortable as BetterOffDEAD lets you, suffocatingly dark as it is, it’ll turn around and give you something like “Bliss”, their anarchy lovesong featuring the word “fuck” one hundred and thirty-three times.

The boys are blessed with incredibly bizarre delivery and an obsession with horror imagery and drugs, absolutely. What you’ll also find, perched alongside the rage and the politics and the posturing, is looming, uncomfortable sexism. These boys are as disenfranchised as they come, and their rebellion is an addiction to narcotics: here that word means drugs, violence and pussy. Pussy, specifically, becomes a focal point and a valid criticism of Zombies: there are no women here. There is plenty of pussy, the object, the commodity, apparently the drug. Meechy ‘garburator-flow’ Darko is likely the greatest offender here, if barely, but that’s also his job – whenever he isn’t shocking you he’s… crouched behind something, waiting to get you on the next track, likely. Women aren’t ignored; they’re non-existent. It’s a question of whether pussy even involves women – and while there’s certainly a ton of sex going on, those verses tend to wander by like distasteful filler, something of a necessary nod to the fact that, yes, Flatbush can have sex. Oh good. A very curious counterexample does arise on “222” though, by far the most shocking moment on an album packed with drugs and crime of every describable variety. “222” features Bridget Perez on the album’s only soft edge, crooning the chorus in between Arc’s capable, calm lyricism. He might be the producer, but Arc also shows a hand here for introspective rap that respects and reflects on women. Like an adult would. As an unexpected moral centre for the album “222” is an anomaly and a refreshing change of pace, a touch of catharsis in the midst of Flatbush Zombies’ descent into gothic-gangster madness.

BetterOffDEAD is a massive step forward for the group, in terms of production and presentation, both of which now arrive more confidently and fully-realized than ever before. Another result of their idiosyncrasy, though, is that criticism of Flatbush Zombies is relatively easy to come by. Were you aware that Action Bronson and Danny Brown both show up on this album? Neither was I, and I was halfway through Bronson’s turn before I even realized it was him, sounding lazier than ever on “Club Soda”. Danny Brown is more excited for his brief arrival on “Drug Parade”, but the Flatbush trio wisely limits downplays their collaborators’ presence, preferring to feature their own bombastic vocals. This much is fine. However, because Bronson and Brown have such trademark voices to begin with, Arc muddies their vocals to the point of near-distortion in order to accentuate his own crew, a bizarre move that damages both tracks. Additionally, and again this is difficult to describe by virtue of his voice, Meechy Darko has a habit of Cee-Lo-ing any track that features him on the chorus. That is, he dominates the mic every time he shows up. He’s Horrorcore Meatloaf. Zombie Juice does the same thing each verse, and the interplay between both emcees’ hyperactivity can be exhausting – as can the album’s suffocating weight. It takes a certain type of mood to listen to Flatbush Zombies, and BetterOffDEAD features none of the levity that their breakout hit “Thug Waffle” hinted back on D.R.U.G.S.. Growing pains abound, certainly (the boys are young), but what results is an album that can often be overwhelming in its enthusiasm to disgust and excite.

BetterOffDEAD is a dark and extensive listen, at times exhaustively negative in its density, but pleasantly surprising in its cultural awareness. No one is happy here; none of the performers, and by extension none of the audience. It’s a different kind of political hip-hop, and perfect for Vancouver’s cloudy Autumn season. As I said above, this is something like punk for a young African American audience, and for all their horror-imagery posturing there’s always a deeper, metaphorical intent behind the trio’s work – even though they clearly take greater joy in the medium (drugs, pageantry) than the message itself. After all, who else could come out with a knowing line like “I’m tryna free the slaves/young minds Bad Brains” than a would-be political messenger? And so Flatbush Zombies are certainly a sonic novelty, but rarely an empty one. The boys know what they’re doing and there is a political statement buried in here – so by all means listen to the divisive crew, but know what you’re getting into.

Flatbush Zombies are a strange thing to listen to. They know this: they’re giving it all away for free. By all means follow me and pick up D.R.U.G.S., or even BetterOffDEAD for yourself. You’ll enjoy it. Or you won’t.

Flatbush Zombies are currently on tour supporting themselves, because they give all their music away for free. I saw them open for Joey Bada$$ and Pro Era. Their energy is crazy on album; ridiculous in person. Recommended.