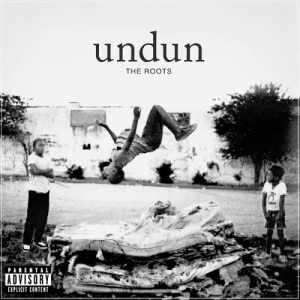 I always listen through an album at least three times before I commit anything to paper, that’s basic policy. Few albums make it past six, fewer still become rituals, enduring works that worm their way past the review process to install themselves in my listening regiment (and on my iPhone) as I gradually unravel their intricacies. Undun is one such album – in fact, you’re safe assuming this review is a work in progress: The Roots have crystallized their trademark inventions into a conceptual powerhouse that seems to constantly beg re-assessment. Everyman Redford Stevens isn’t an enigmatic figure, and his story is (perhaps) a prototypical one, but it’s compelling. I keep going back through his reverse-narrative looking for details, digging for the causes to his downfall, each time returning with something different to turn over in my mind. Readers, consider this your teal deer (tl;dr): Undun is a dense and exciting little concept-album and it deserves a half-hour of your time. If you like thoughtful hip-hop that doesn’t compromise in the name of authenticity, this can be your winter joint. It’s dead short, so go spin it so that we can discuss it later – over Guinness and comics, perhaps.

This album’s been available for free online streaming for while now, so Roots fans are already going to know what I mean when I say that Undun is really brief (even disappointingly so), and more than a little strange. “Memento-style” gets thrown around a lot in critical reviews of this album (being critics’ favourite cinema reference after “Rashōmon-style”), and there’s an extent to which that’s true: Undun is the reverse-narrative of one Redford (“‘Hood Everyman”) Stevens, and it begins very emphatically and obviously with his death, marking an instant and refreshing reversal of the typical concept-album protagonist’s narrative. By now, readers, you also know that I love concept albums, and Undun doesn’t disappoint: by intentionally reversing the linear formula of thematically similar concept-works like The Wall and even Tommy, The Roots set themselves apart. The fate of their African-American protagonist is prefigured in the first instrumental track, and as an audience we’re left to pick up the pieces reverse-chronologically in order to figure this whole mess out; the results are predictably disorienting and relentlessly ominous. Another novel touch, the plethora of performers articulating Redford don’t go around blaming anyone the way Pink did back in the late 70’s: even to the extent of narrow-mindedness this is Redford’s story, and it centers around his decisions and his conditions. Undun is one black American’s struggle, beginning (that is, ending) with a lengthy piano suite, and ending (or beginning) with the silence of his death. So how does the eleven-strong Jimmy Fallon house-band go about sonically retelling the details of Redford’s downfall? To be frank, they hardly do at all.

Undun opens to silence, and then to the drone of a failed heart rate monitor and a partially back-masked instrumental, fading gradually into the strings and choirs and organs whose accumulation slowly immerses us into “Sleep”, the album’s proper starting-point. Because this is The Roots, the grand majority of the instrumentals on display are performed live, and as I’ve mentioned in several previous reviews, live instrumentals ground hip-hop – they have a way of forcing things down to street-level. As a result, even when Aaron Livingston breaks the ambience of the opening track, singing “I’ve lost a lot of sleep to dreams/And I do not miss them yet/I wouldn’t wish them on than worst of enemies/Let them burn, go from here/Like when autumn leaves”, the backing beat never loses itself to the poeticism of the lyrics; from the metronome snaps to the organ arpeggios, “Sleep” is ominous but unpretentious. It’s the moment before Redford dies, but Black Thought and co. keep things introspective and eerily quiet, it gives the audience foreboding when they might expect triumph (or vindication), and as is Undun’s thematic mantra, reveals effectively nothing as to Redford’s actual cause of death. Things (literally) come to life following that, as “Make My” flourishes out of a great guest verse by up-and-comer Big K.R.I.T., waxing materialistic-yet-thoughtful lines on his opener, “I did it all for the money lord, it’s what it seems/Well in the world of night terrors, it’s hard to dream/Hollerin’ cash rules everything, let’s call it C.R.E.A.M./cause when it rises to the top – you get the finer things”. The Roots’ resident MC, Black Thought, even thinks to remind us ahead of time that we won’t be fully assembling Redford’s story, that it’s an entirely intentional conceit: ““Unwritten and unraveled/It’s the dead-man’s pedantic” he tells us, preemptively denying answers to questions that nag the listener throughout Undun. “Make My” is comfortable and lush, a slow groove with shifting keyboards and Dice Raw thoroughly justifying his presence on the sung chorus – again taking the listener another step backwards into the life of Redford Stevens, further into his late-life introspection.

Intermission time. Basically, I can do this sort of writeup for every track of the album and end up with a 5000-word review (and believe me, the option’s tempting). Every track features gorgeous, full production (thanks in no small part to live-instrumentalism). Every track is introspective, here gloomy, occasionally celebratory (on the intermission-like “Kool On”). Every track features a glut of guest-artists that miraculously manage to sidestep the collaboration-effort feel that has, in the past, prevented me from fully enjoying The Roots’ efforts. “One Time” features a ?uestlove drum-line that opens like something off Rising Down. Several tracks feature sung Dice Raw choruses that have more or less completely legitimized him in my sight. “The OtherSide” is stark and crushing, with Just Blaze yelling on the intro and Black Thought channeling Redford (perhaps in his teens), claiming “You might say I could be doin something positive … But when that paper got low, so did my tolerance/and there aint no truth in the dare, without the consequence/Listen if not for these ‘hood inventions I’d just be another kid from the block, with no intentions”. It’s partially autobiographical, and like all of Undun it’s looming and desperate and gives almost no plot details at all. To get further into the lyrical inventions here would be to start block-quoting – which I’m going to staunchly oppose – but rest assured that the tone of personal advancement through criminal behaviour, of desperate situations and the seemingly-inevitable means invented to survive them, absolutely pervades this album. The helplessness and claustrophobia intensify as the listener nears the album’s closer, naturally expecting some twist-ending genesis to Redford’s downfall. By the time you hit the album’s final vocal line with Dice Raw’s “I’m just tryna tip the scales my way”, and hear it followed by four brief instrumental tracks, you realize the album offers no resolution whatsoever, and depending on your aesthetic leanings you’ll either be thoroughly perplexed or absolutely impressed (I know which I was).

So Undun is perplexing and contradictory, it denies itself a proper narrative in the name of generalizing and acting as a metaphor for the experiences the underprivileged and desperate in America; that much is clear. All of this it accomplishes as well as any other album I’ve heard, and it isn’t alone in it’s concept (The Roots themselves approach this topic constantly in their work). Of course, Undun isn’t a perfect album either – for instance it’s a gigantic downer, and despite one or two exceptions (“The OtherSide” and “Kool On”, tenuously) every track is depressing and realistic. Undun’s ‘hood dreams are locked firmly in the realm of reality, and for Black Thought et al. that reality is one of brief ecstasy, crime and premature death. Perhaps Undun is a quietly triumphant work (being, after all, a creation of African Americans that circumvented Redford’s destructive cycle), but it absolutely is a sad, slow album; for me, at least, it’s perfect somber Autumn music. The charge of pretension can be leveled at Undun (and, yes, this accusation sticks against all Roots projects), though I feel its complexity need not be a weakness. Undun isn’t condemning, it’s staunchly realistic, and if it’s overarching gloominess proves too much to bear, evoking those emotions is well within Undun’s artistic intent. More problematic is the fact that Undun has blinders on: there are no women here, no secondary characters (if you assume all collaborators are articulating in the character of Redford, as the album seems to intend), no concrete plot details or resolution, no family or friends. It can be argued the album even loses focus of its reverse-chronological conceit halfway through, though the finale brings everything into focus. Regardless, Undun is, very emphatically, one lonely doomed man’s gradual slide into death. Redford is a prototype and a metaphor, and apparently for that reason The Roots opt to excise almost all specific details of his life from the album (though we know he’s a poet, writer, and comics fan, and the music videos fill out his character even more). It makes for an isolating listen, and it undeniably hinders the experience in a sense – for some its limited lyrical scope will significantly impact their enjoyment. Likely for these same reasons, I’m again obligated to mention that Undun is just short as heck. Clocking in at a slim 38 minutes, closer to 30 if you discount the instrumental tracks, ‘concept-EP’ might be a better way of explaining The Roots’ thought-process here. Personally I’ve found their sprawling, lengthy discography to be a hindrance in the past, but certainly for full asking price listeners are getting an uncharacteristically slim amount of content here.

Undun is an unapologetic art piece. It’s short and narrow-minded, conceptually dense, sad and desperate. This is all to say that I’ve really enjoyed it, but it falls far outside the norm (even for an album by The Roots). You have to know what you’re getting into here: it’s slim profile and status as The Roots’ first and only concept-album are inevitably going to set it apart from their catalogue. If anything I’ve written here sounds appealing to you, Undun might be exactly what you need. And if it sounds like a pretentious art-piece that drags The Roots and their pack of collaborators off to a haughty place you’d rather not see them go? Well, there’s always last year’s How I Got Over.