Alestorm – Back In Time 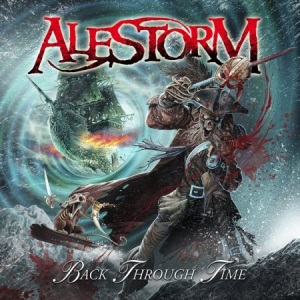 There’s something to be said for a band that knows exactly how silly they are, exactly what the audience is expecting, and exactly how to play to their strengths and limitations. Such is the case with the keytar-toting Scotsmen formerly known as Battleheart: it’s really hard to hate a band that devotes an entire track to describing how they plan to milk this Pirate-Metal thing for all its worth (“Scraping the Barrel“), and several more to their dear, dear love of alcohol (“Rum“, “I Am A Cider Drinker“, every other track). Back Through Time, with its pair of Viking-themed tracks and awesome cover art, might get you thinking this is Alestorm’s inevitable concept album: it isn’t. While unified by slick production values, a hook-based chanty style and – of course – lyrical content, Back Through Time runs away from itself after the introductory track – a clear symptom of a band having far too much fun with puns and revelry to worry about backing up their time-traveling framework with anything more substantial. That is completely okay: Back Through Time is perfectly comfortable as an infectious and unexpectedly hilarious action-film of an album.

Sometimes that’s all we really need.