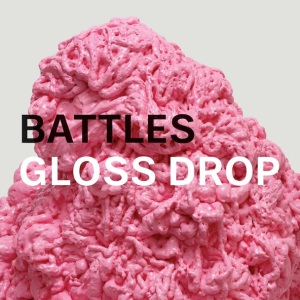 The art of Gloss Drop looks like a half-melted gelato, it’s an eye-screaming shade of pink, and it bears a disturbing resemblance to that chicken-paste the Internet introduced us to last year. In all its bizarre and intriguing glory, that pile of goop is the perfect accompaniment to Battles’ latest sonic blender of extreme technicality, prog-rock groove and surprising danceability.

Their second album sees Battles returning to their mostly-instrumental roots, mostly eschewing vocals in favour of deep polyrhythmic jam sessions, fusing programming and studio virtuosity into a thick groove that begs to be played loud. Every sound on Gloss Drop is percussive: the electric guitars are distorted into steel drums, synthesizers whirl across tracks like “Futura” and “Africastle“, and vocal features are kept minimal as John Stanier’s manic drumming conjoins everything with metronome efficiency. Every sound bleeds into every other, blurring into an organic pastiche (paste?) that only ever slows to amass it into another monster loop a moment later. If you don’t mind your summers a bit psychedelic, this might just end up your joint.